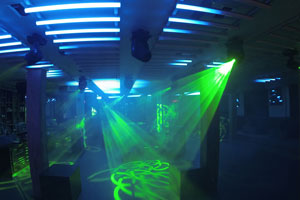 TORONTO – The red hot Cinema club in Toronto’s hip Liberty Village isn’t located in a former movie theater. Instead, its creators chose the name because they wanted a club that exposed visitors to evocative visual scenes that “could only be brought to life on the big screen.” A good example of this design vision can be seen on the ceiling over Cinema’s second story dance floor, a unique metallic looking structure that houses 16 Intimidator Spot LED 350 moving heads from CHAUVET® DJ.

The dance floor ceiling resembles what LD Michael Meacham of iDesign (Miami), describes as “a low res VersaTube,” referring to the well-known metal building structures.  A VersaTube look at an upscale, trendy nightclub? Yes indeed! Meacham dramatizes this surprising, power-packed visual image in his lighting design, much to the delight of the club’s owners and patrons.

“There are white aluminum bars across a rather low ceiling,” explained the LD, whose lighting designs are in some of the world’s most recognizable clubs. “I wanted to use this architectural feature to my advantage as lighting designer to create a very original, unexpected and transformative look over the dance floor, in keeping with the out-of-the-ordinary spirit of Cinema.”

To do this, Meacham placed color bars along the struts of the ceiling and pixel strobes in the corners. Then he anchored the design with 16 Intimidators, positioned in four in groups of four across ceiling.  “We use the Intimidators to roll beams over the dance floor and the area around it,” he explained. “The beams are programmed in different zones to create some excellent dimming and scrolling patters, which results in a very deep captivating look.”

A 75-watt LED moving head, the Intimidator Spot LED 350 features a motorized focus, rotating gobos, and a three-faced rotating prism, which together with the fixture’s high output make it ideal for casting crisp impactful images over large areas like the Cinema dance floor. 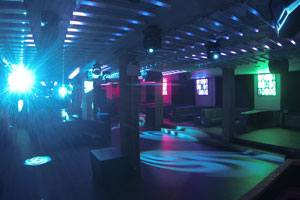 “The Intimidators perform extremely well in the scrolling design we have at Cinema,” said Meacham. “As LED fixtures, they don’t consume a lot of power, but they have the output we want in a dance floor environment where there are other lights and all these different things going on. We used a lot of intense displays at this club, so the Intimidators had to give us very sharp beams; and that’s exactly what they delivered.”

Interestingly, when Cinema opened in 2012, the club owners found that the original lighting design for the second story dance floor didn’t measure up to the transformative look that characterized other areas of the club – so they called in Meacham to work his magic.

“The original lighting design relied on static pars, so there was no element of surprise; and there was no real movement or excitement,” said Meacham. “We created a more dynamic design with the help of products like the Intimidator and as a result have taken the dance floor to a new place visually, which is really the philosophy behind this entire club design.  So everyone involved is very happy with how this turned out.”