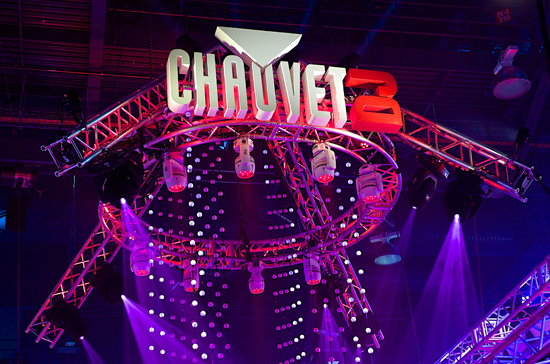 LAS VEGAS – New York lighting designer, Jason Ayala (aka Jason Blends) has illuminated shows for stars like Pharrell Williams and Duran Duran. His designs have also turned heads at some of the hottest clubs in the Big Apple. But, his eyes light up like a 10-year-old’s when he talks about the Gravitron, a spaceship amusement park ride he enjoyed as a child. Ayala tapped into this youthful energy when he was asked to design the LDI show booth for CHAUVET DJ.

“When Berenice Chauvet (vice president of Chauvet) talked to me about designing the CHAUVET DJ booth at LDI, my mind immediately went back to the Gravitron and images of space travel,” he said. “Fixtures like the Intimidators and MotionOrbs have the kind of sparkling intensity that you imagine when you think of space travel. I could see arranging these lights in a circular configuration and flying them over the booth to create the impression of a spaceship taking flight.”

Ayala turned this galactic vision into an eye-popping reality at the CHAUVET DJ booth with a pixel-mapped lighting design centered around a spaceship-like circular structure constructed with Trusst aluminum trussing from CHAUVET DJ’s sister company TRUSST. The structure, which flew over the middle of the booth, consisted of a 3-meter circle with four 3-meter legs extending out from its core. 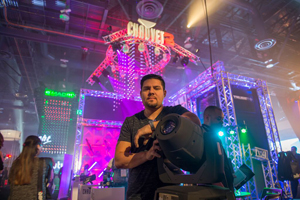 “We flew two Intimidator 455Z IRC fixtures on the outer edge of each or the four legs, because this created an intense outline for the structure,” said Ayala. “On the inside we positioned the Intimidator Wash Zoom 350 IRC to create a spaceship glow.  We hung MotionOrbs from the center to give the whole thing a 3D perspective; and in the center of it all, we positioned a Geyser RGB fogger to present the image of a spaceship taking off.”

Doing his own pixel mapping, Ayala animated the massive structure with chase scenes, odd-even patterns and abstract images. Although the multi-colored and multi-dimensional structure gave rise to flights of fancy, there was also a hardcore practical thought process at work behind this impressive design.

“Without a doubt we created something fun, but we also wanted our design to deliver an important message,” said Ayala. “Our big mission was to make sure that people who stopped by the booth got a better understanding of what you can accomplish with CHAUVET DJ fixtures. There are a lot of great performance features engineered into products like the Intimidator Series, COLORbands and other CHAUVET DJ products, and we wanted to showcase these capabilities in our design.”

The capabilities of the CHAUVET DJ fixtures were also showcased along the side and back walls of the booth. Ayala divided these areas into sections marked off by 2.5 meter Trusst sticks. A large section of wall was lined with two rows of six COLORband PiX LED strips, which were arranged diagonally. The LD pixel mapped the COLORband units to work in coordination with other fixtures along the wall of the booth.

Ayala designed six scenes for the booth that he rotated throughout the show. He also created two lightshows. “We wanted to create something different and fun to engage people,” he said. Judging from all of the visitors who cranked their heads up to admire his “spaceship,” he succeeded in doing this with flying colors. 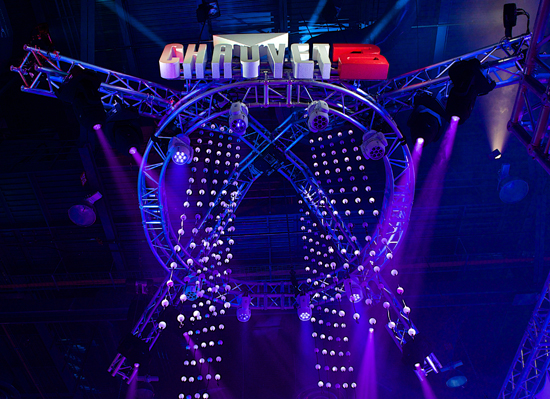