LOS ANGELES – Eric Cathcart begins the design process by forming an idea for a distinct look in his head.  Then he goes to his rental company contacts, does his best to describe his vision down to the smallest detail, and asks which fixtures in their inventory can help  him achieve it.

This sums up what happened late last year when Cathcart envisioned expanding the look of his show to better reflect the free-flowing sound of Silversun Pickups. Understanding Cathcart’s inspiration as they did, his contacts at Upstaging, Inc. recommend the COLORband PiX from CHAUVET DJ.

“I have been working with Silversun off and on since 2016,” said Cathcart, owner of Bigtime Lighting Design. “The album cycle started June of 2019 with a very minimal floor package, consisting of strobes and small movers.  For the new year, I wanted to create a wall of light to close the gap between the floor package and the local production. Silversun’s music has a lot of dynamics with a lot of rhythmic underlying synth that I wanted to capture with the use of LED pixels.”

This goal led Cathcart to the COLORband PiX. “Given what I wanted to accomplish, I went straight to this fixture,” he said. “We took off the trunnions, and replaced them with eye bolts. Then we added in a few bits of aircraft cable, half-couplers, as well as some carabiners and straps — and presto, we had a wall of light.”

Cathcart arranged 28 COLORband PiX fixtures in seven columns of equal height. Pixel mapping the fixtures, each of which have 12 cells, he was able to create a constant stream of unique and very varied looks supporting Silversun Pickups multi-faceted music, which moves from sweetly soft to screeching loud in the blink of an eye.

Previously, I had been traveling with the floor package on this tour, which meant that I pretty much had to focus on meat and potatoes looks that were preprogrammed,” said Cathcart. “That worked out ok, but with the new wall of light behind the band, I became less dependent on house rigs.  Most importantly, this allowed me to focus on all of the accents and intricacies of the music.”

Unfortunately,  Silversun Pickup’s 2020 tour was cut short, after the band’s March 12 show in Atlanta due to the COVID-19 pandemic. But in that show and all the ones prior to it,  the vision that had danced inside Cathcart’s head came to life, captivating fans with the way it reflected the intricate music being performed on stage – and leaving them all with another thing to look forward to when the lockdown passes into history. 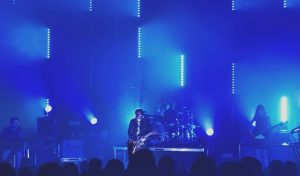 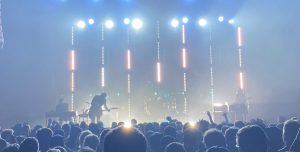