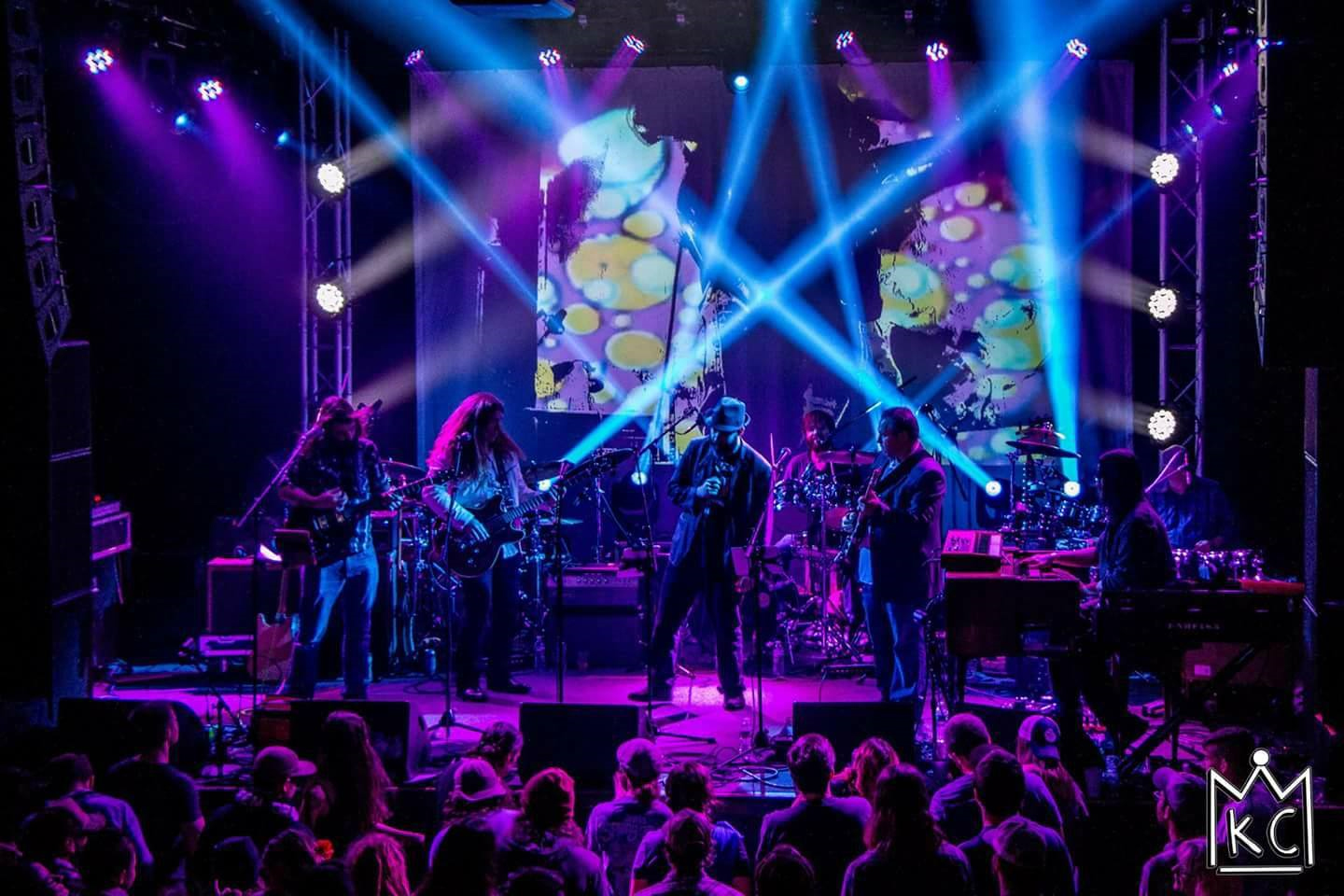 BOSTON, MA – Great deals on televisions and refrigerators? That’s nice, but for progressive music fans in the Boston area, the really big news on Black Friday was the album release party for the eponymous LP by Matthew Stubbs and the Antiguas. Lending some eye-popping sizzle to the sold-out event at the iconic Sinclair club in the heart of Harvard Square was a fast-moving lightshow by freelance visual artist and lighting designer Vin Pugliese that was supercharged by a CHAUVET DJ Intimidator floor package.

Pugliese brought eight Intimidator Hybrid 140SR moving fixtures to the club, positioning them tightly on upstage risers. “I was looking to create colored aerials we could use to accentuate the psychedelic timecoded visuals and live camera feed that would be projected on the center stage screen,” he said. “The Intimidators are punchy and jam packed full of features. Using them as the floor package gave me the versatility to accentuate the visuals with a wide variety of killer looks.”

Using Resolume Arena 6 to create content, Pugliese projected edgy breakout patterns and historic counterculture videos on the wall. These images were essential to evoking the desired mood for the party, since the psychedelic surf rock fusion sound of Matthew Stubbs and the Antiguas’ new album represented something of a departure for its frontman. A world-class guitarist who does 50-60 tour dates a year with the legendary Grammy-nominated harmonicist and Blues Hall of Fame inductee Charlie Musselwhite, Stubbs has always been strongly associated with blues.

“The video images were important to setting an atmosphere that represented the ’60s psychedelia vibe Matt is going for,” said Pugliese. “If we didn’t have lights that could match them in color and intensity, it would have been much more difficult to set the mood.”

Other artists performing at the album release party were Bearly Dead and Julie Rhodes. Like Matthew Stubbs and the Antiguas, they were also nominated for 2017 Boston Music Awards. (The awards ceremony will be held Thursday December 7th at House of Blues Boston.)

With a 140W discharge light engine and motorized focus, the Intimidator Hybrid 140SR fixtures in Pugliese’s rig had no trouble supporting the intensity of his show for all artists at the party. The overlapping dual prisms in the fixtures gave him a wide range of beam dynamics to use when matching content from the video panels. He also took advantage of their gobo morphing capabilities to create a variety of mid-air projections.

Positioned as they were in close quarters along the rear of the stage, the Intimidator Hybrid fixtures created a dense field of light behind the performers. Pugliese utilized this arrangement to accent the musicians on stage with some intense backlighting. There were times when he limited light from the Intimidators to monochromatic shades of the same color, creating a surreal visual architecture that the artists seemed to move through.

At other times, he crisscrossed the area behind the artists with beams of different sizes, suggesting patterns that were similar to those displayed on the video projections. The net result of this interplay between light beams and video images was to create an immersive environment that drew people in, while opening their minds to new possibilities.

In this respect, as in many others, this light and video show was the perfect visual accompaniment for a blues master and other artists venturing forth into new psychedelic tinged forms of musical expression. 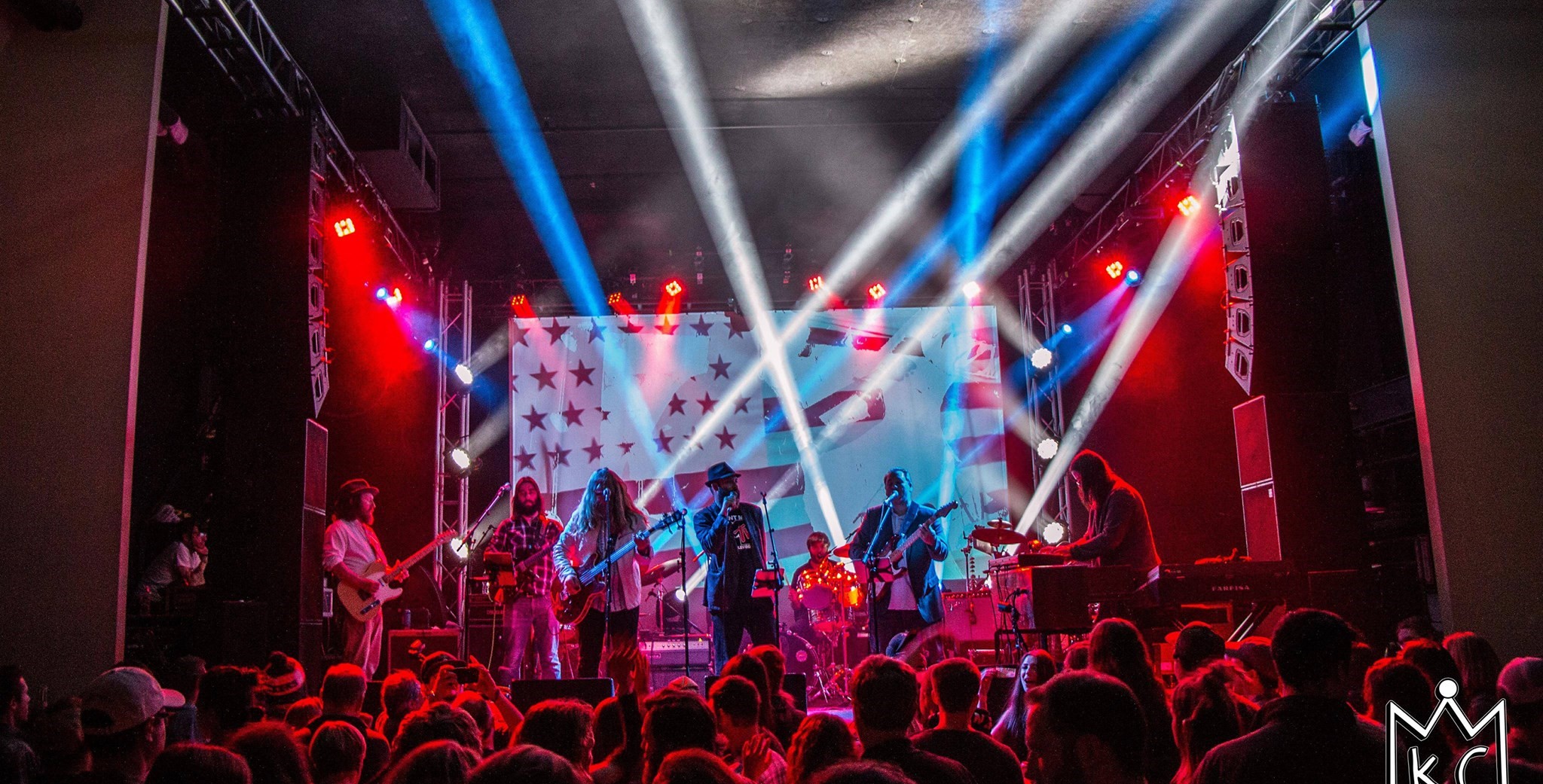